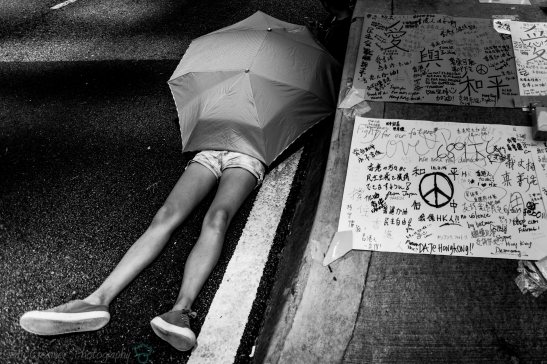 We’ve been inundated with local and international media coverage about the civil disobedience movement in Hong Kong, including from this blog, which is supposedly about Mainland China!

But how closely have you been watching? Do you know your umbrella revolution from your universal suffrage?

Read the following statement about events of the Occupy protests and decide which ones are TRUE and which ones FALSE. Can you discern the porkies from the, er, true statements? Answers at the end.

1. Just before the start of the sit-ins, the main organisers of Occupy Central with Love and Peace shaved their heads as an initial protest.

2. The movement officially started days earlier than planned because of a student boycott and the police’s reaction to it.

3. The ‘Umbrella Revolution’ nickname came from the protestors’ signature defence: repelling pepper spray with umbrellas. The organisers insist it is not a revolution.

4. Chinese megastar Jackie Chan has spoken out against the movement, saying it has already cost Hong Kong “350 billion”.

5. Smooth jazz maestro Kenny G visited a protest site, took some photos, was criticised by Beijing and then insisted he didn’t support the movement.

6. The guy that police are alleged to have beaten up on camera is a member of the nominating committee that elected the territory’s current Chief Executive, CY Leung.

7. Many of the anti-occupy protestors arrested for attacking the Mong Kok site were later found to have Triad backgrounds.

8. Special homework areas have been set up so that students can still study even during the protests.

9. Police were searching for a man of South Asian origin who appeared to stab an Occupy protestor while removing barricades from Mong Kok, yet the protestor escaped largely uninjured.

10. One of the Chinese government’s most prominent responses to the protests so far has been to blame it on ‘foreign interference’; another was to say “the sun rises as usual”.

How did you do? Too easy? Do you feel pretty clued up on your Occupy events?

Answers: they’re all true! Nothing like a protest to bring out the weird and wacky in Hong Kong. Any other examples you news hounds can find?