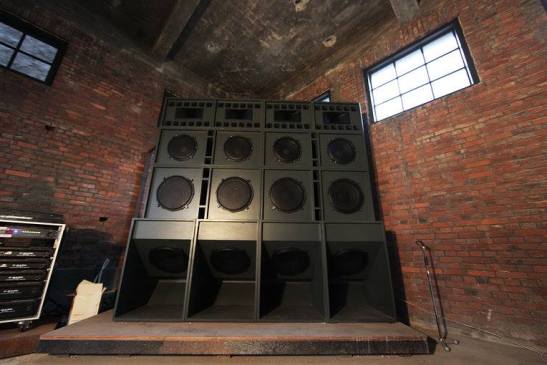 Modern Busan, South Korea, is about as far removed from 1950s Kingston, Jamaica, as it is possible for two cities to be. However, this April sees the unveiling of South Korea’s first dub reggae sound system, of the kind used for the original sound clash events of Jamaica’s capital some fifty years previously.

Sound system events, or sound clashes, were parties held in the streets of Kingston’s Trenchtown ghettos, originally playing R&B imported from the States. The emergence of sound system legends such as Clement ‘Coxone’ Dodd and Duke Reid saw the scene shift towards the domestic sounds of ska and reggae. The events also became more competitive with rival crews battling to make the increasingly large crowds migrate toward their sound system over their opponent’s. Choice of record was important, but more so the capability of the sound system to be LOUD, with rigs often having the capability to play bass with a frequency in excess of 30,00 watts!

The operators of these walls of sound were referred to as deejays, who sang over (not played) the records, and the selector who, well, selected the tunes. The sound system tradition is still very much alive, with events happening the world over. South Korea’s neighbour, Japan, has a thriving sound system culture, but this has passed the peninsula by…until now.

The Royal Flash P.O.A. sound system was officially unveiled last October. It weighs in at some 12,600 kilowatts of power. The architects of the Royal Flash are King Tekuru Jung and Yun Seonggi. The pair are also a deejay and selector duo in the traditional sense.

This April sees the second Royal Flash event, a collaboration with local bass music party BASSment. Leading DJ and co-founder of BASSment, Heeseok ‘Malbool’ Jeong told me, “It’s great to finally have a real sound system in my country, and it feels good to be keeping alive the sound clash spirit in this part of Asia.”