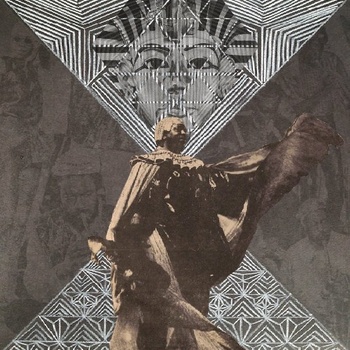 Last Saturday night I shared a few beers with a friend who has recently returned from a stay in New York. I listened (not without envy) as he told me with unfettered enthusiasm about a Sun Ra Arkestra gig he was fortunate enough to see at a small venue in the East Village.

Sun Ra, the legendary free jazz pianist, band leader and composer passed away more than twenty years ago, but his ‘arkestra’ is regularly evolving and still playing, led by the age-defying saxophonist, 89 year-old (yep!) Marshall Allen.

The East Village was where Sun Ra (born Herman Blount) grew up and first played. Having come away from the gig aware that he’d experienced something very special, almost reverent, my friend delved deeper into the Arkestra’s extensive back catalogue, and in doing so stumbled upon an interesting contemporary project on the superb bandcamp site.

Cosmic Compositions is a series of compilations that include reworks of some of the most influential figures of the free jazz movement of the 60’s, including Pharoah Sanders, Alice Coltrane and our man, Sun Ra. The project was conceived in Auckland, New Zealand, but the downloadable albums include artists from a number of nations. The music itself is very much down-tempo, with the featured artist’s samples sitting over layered hip-hop beats. For the most part, the tunes remain respectful of the original artists while breathing new life into their creations; not an easy task. Much of the original free jazz/avante-guard material is a little hard to digest. However, while much of the beat-smithery on the Cosmic Compilations isn’t your standard commercial hip-hop fare, it is accessible enough to encourage listeners to check out the original stuff that provided the inspiration.

The project’s creators put it this way:

“We feel there is a huge similarity between the Avant-Garde/Free Jazz movement of the 50’s & 60’s & the beat movement of Today. As both movements attempted to break down, extend & alter the conventions of their original genres (Jazz & Hip Hop) & were never afraid to experiment & improvise to create something that wasn’t accepted commercially at the time.”

The entire series is available to download on a name-your-price basis, and all proceeds are donated to the Philippines Relief Fund.

This entry was posted on February 16, 2014 by theguestroom in Griffin it.